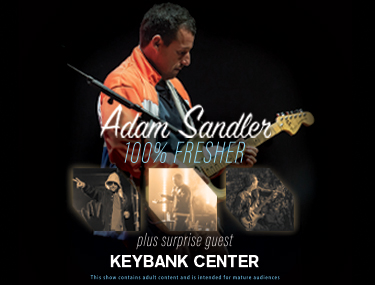 ADAM SANDLER IS STILL HAPPENING, BUT AT A FUTURE DATE YET TO BE ANNOUNCED.

NEW DATE:  TO BE ANNOUNCED

HANG ON TO YOUR TICKETS - WE'LL UPDATE AS SOON AS THE NEW DATE IS ANNOUNCED.

Adam Sandler plus surprise guest will bring his 100% Fresher tour to KeyBank Center on a date TBD.

A successful actor, writer, producer, and musician, Sandler has been performing for live audiences on a sold-out tour over the last couple of years across the U.S. and Canada. 100% Fresh was released on Netflix on October 23rd, 2018 and marked Sandler’s first comedy special in twenty years. In conjunction with Netflix, Warner Bros. Records released the audio companion to Sandler’s critically acclaimed Netflix special, 100% Fresh: A Netflix Original Comedy Special, on all streaming services and CD. Sandler’s comedy albums on Warner Bros. Records have gone multi-platinum and have collectively sold more than six million copies to date.

The show contains adult content and is intended for mature audiences.

Tickets are on sale now and can be purchased online at www.tickets.com, or by calling 888-223-6000.  All tickets subject to applicable service charges and fees. Dates and times subject to change without notice.