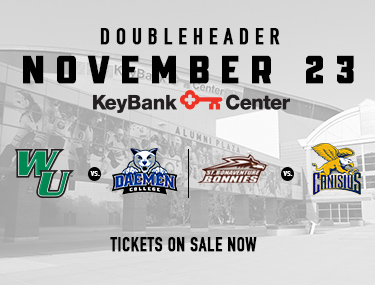 As Canisius College recognizes 150 years of excellence in Buffalo with a year-long sesquicentennial celebration, the Canisius athletic department announced Wednesday that the annual men’s basketball game between the Golden Griffins and the St. Bonaventure Bonnies, set for Saturday, Nov. 23, will be played at KeyBank Center. Tipoff is set for 2:30 p.m.

The Canisius – St. Bonaventure game will be the back-end of a basketball doubleheader at KeyBank Center as the Daemen men’s basketball program will play its first game in the arena when the Wildcats host Wilmington University at noon. For Canisius, the game against the Bonnies will be the 48th regular-season game played in downtown Buffalo since 1996, and it will mark the first time the Griffs have played in the venue since the 2016-17 campaign, when the Blue and Gold beat cross-town rival Buffalo in overtime.

“As Canisius celebrates 150 years of excellence during our sesquicentennial, a men’s basketball game at KeyBank Center has been a focus in our planning,” Canisius Director of Athletics Bill Maher said. “This marks the 100th anniversary of the start of the Canisius – St. Bonaventure men’s basketball rivalry, and our alumni and fans fondly remember the Griffs and the Bonnies meeting in the old Little Three doubleheaders at the Aud. It is my hope that this year’s basketball doubleheader is another step forward in returning to the Big 4 basketball doubleheaders, which we have hosted at KeyBank Center in the past.”

Canisius and St. Bonaventure will be meeting for the 168th time in series history, and this year’s game at KeyBank Center will mark the first time the two long-time rivals have squared off on the hardwood in KeyBank Center since Nov. 28, 2008 – a 68-66 victory for the Blue and Gold. Dating back to the 1940-41 season, Canisius and St. Bonaventure have met at either The Aud, Marine Midland Arena or HSBC Arena 73 times.

As part of the sesquicentennial celebration, Canisius will announce its Top-15 Team during halftime of the game. An online fan voting platform for that team will begin in mid-September.

Tickets are on sale now and cost $25 with a limited number of courtside seats available for $35. Groups of 20 or more will be able to purchase a block of group tickets, with each ticket being priced at $20. To purchase group tickets, please call (716) 888-8286.